All things bright and beautiful: light and colour manipulation

School of physics, University of Exeter

Professor Vukusic has done a lecture before on a similar topic. The link below shows information about a lecture that he gave to sixth formers in 2012

Beware though as this lecture was aimed at teachers. I must admit to not finding it particularly easy as it is a long time since I had to work with this sort of maths. To all school students reading this, let this be a lesson to you. If you don’t use it you lose it.

The science of light and colour is fantastically important in an enormous number of areas such as observing and understanding the universe, diagnosis and treatment processes in medicine, efficient communications and signal processing in industries. The talk looked at the basic concepts of the topic and showed how both the biological world and technology are making the most of light’s astonishing properties.

There are many references to complex numbers throughout the presentation.

If you are have only gone as far as GCSE maths you will have been told that you can’t take the square root of a negative number. That’s because you had no numbers which were negative after you’d squared them (so you couldn’t “go backwards” by taking the square root). Every number was positive after you squared it. So you couldn’t very well square-root a negative and expect to come up with anything sensible.

Now, however, you can take the square root of a negative number, but it involves using a new number to do it. This new number was invented (discovered?) around the time of the Reformation (see above). At that time, nobody believed that any “real world” use would be found for this new number, other than easing the computations involved in solving certain equations, so the new number was viewed as being a pretend number invented for convenience sake.

(But then, when you think about it, aren’t all numbers inventions? It’s not like numbers grow on trees! They live in our heads. We made them all up! Why not invent a new one, as long as it works okay with what we already have?)

Anyway, this new number was called “i“, standing for “imaginary”, because “everybody knew” that i wasn’t “real”. (That’s why you couldn’t take the square root of a negative number before: you only had “real” numbers; that is, numbers without the “i” in them.) The imaginary is defined to be:

Now, you may think you can do this:

But this doesn’t make any sense! You already have two numbers that square to 1; namely –1 and +1. And i already squares to –1. So it’s not reasonable that i would also square to 1. This points out an important detail: When dealing with imaginaries, you gain something (the ability to deal with negatives inside square roots), but you also lose something (some of the flexibility and convenient rules you used to have when dealing with square roots). In particular, YOU MUST ALWAYS DO THE i-PART FIRST!

At Rooks Heath A level students learn about simple harmonic motion in year 13 but they don’t need to know the maths seen during the lecture.

Complex numbers are important because they allow phase analysis. Φ is a phase term.

Mechanical impedance is a measure of how much a structure resists motion when subjected to a given force.

The graph above  is something that A level students are familiar with (but in not so much detail). If an oscillator is forced to oscillate at its natural frequency you get the maximum amplitude. However if you damp the oscillation you decrease the amplitude.

At A level students meet refractive index, harmonic oscillators, polarisation and electric fields but not necessarily together. The lecture actually showed that they are most definitely linked.

At school level the refractive index (n) is simply the speed of light in a vacuum/air divided by the speed of light in a material although students will normally calculate it by dividing sine of the angle of incidence in air by the sine of the angle of refraction in the material. The diagram below left shows refraction of light at the interface between two media of different refractive indices, with n2>n1. Since the phase velocity is lower in the second medium (v2<v1), the angle of refraction θ2 is less than the angle of incidence θ1; that is, the ray in the higher-index medium is closer to the normal.

Electrical polarisability is the relative tendency of a charge distribution, like the electron cloud of an atom or molecule, to be distorted from its normal shape by an external electric field.

The permittivity of a medium describes how much electric field (more correctly, flux) is ‘generated’ per unit charge in that medium. Symbol: e
Unit: farad meter-1 (F m-1). The permittivity of a substance (ε) is a characteristic which describes how it affects any electric field set up in it. A high permittivity tends to reduce any electric field present. In electromagnetism, permeability (µ) is the measure of the ability of a material to support the formation of a magnetic field within itself. In other words, it is the degree of magnetisation that a material obtains in response to an applied magnetic field. In both cases if there is a 0 subscript then both are referring to a vacuum/air.

The negative sign on the permittivity is largely related to the “phase” between the applied electric field (such as is present for light that is incident on material) and the electron distribution in the material that is produced by the incident light (E field).

To understand this as a concept, think of Hooke’s Law F=-kx; the negative sign in this means that the applied force is out of phase (opposite direction) with the displacement it produces.

Back to ε now; the relation between applied E-field and the electric displacement (D) it produces is 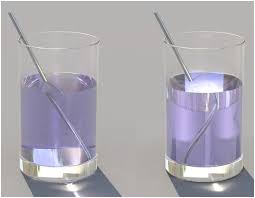 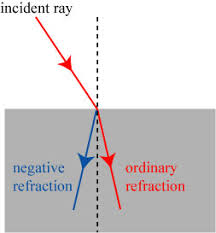 Metamaterials are artificial materials engineered to have properties that may not be found in nature.

Plasma is one of the four fundamental states of matter (the others being solid, liquid, and gas). Heating a gas may ionise its molecules or atoms (reducing or increasing the number of electrons in them), thus turning it into a plasma, which contains charged particles: positive ions and negative electrons or ions. Ionisation can be induced by other means, such as strong electromagnetic field applied with a laser or microwave generator, and is accompanied by the dissociation of molecular bonds, if present. Plasma can also be created by the application of an electric field on a gas, where the underlying process is the Townsend avalanche.

A magneto-optic effect is any one of a number of phenomena in which an electromagnetic wave propagates through a medium that has been altered by the presence of a quasistatic magnetic field. In such a material, which is also called gyrotropic or gyromagnetic, left- and right-rotating elliptical polarisations can propagate at different speeds, leading to a number of important phenomena. When light is transmitted through a layer of magneto-optic material, the result is called the Faraday effect: the plane of polarisation can be rotated, forming a Faraday rotator. The results of reflection from a magneto-optic material are known as the magneto-optic Kerr effect (not to be confused with the nonlinear Kerr effect). The above picture shows a split-ring resonator array (metamaterial) arranged to produce a negative index of refraction, constructed of copper split-ring resonators and wires mounted on interlocking sheets of fibreglass circuit board.
The total array consists of 3 by 20×20 unit cells with overall dimensions of 10×100×100 millimetres. The height of 10 millimetres measures a little more than six subdivision marks on the ruler, which is marked in inches.
Credit: NASA Glenn Research Center

The introduction of metamaterials in the 1990’s opened up new possibilities in electromagnetics;

There has been a successful implementation of metamaterial technology within the microwave spectrum;

There are difficulties in making and applying optical metamaterials;

Most work at the moment relates to modelling proposed designs.

Photonic crystals are periodic optical nanostructures that affect the motion of photons in much the same way that semiconductors affect electrons. Photonic crystals occur in nature in the form of structural coloration and promise to be useful in different forms in a range of applications. 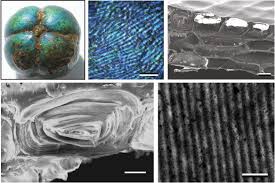 Iridescence (also known as goniochromism) is generally known as the property of certain surfaces that appear to change colour as the angle of view or the angle of illumination changes. Examples of iridescence include soap bubbles, butterfly wings and sea shells.

Synthetic mimic of plant and seed design is being suggested for the development of new coloured fibres for clothing and new a source of surgical stitching material.