Even though I have retired from day to day physics teaching I still intend attending courses when I can.

On Wednesday 15th February I was luckily able to attend a presentation on a new initiative, Astro Academy: Principia, by the National space academy held at the Royal Astronomical Society.

The National Space Academy is a not-for-profit organisation created with the dual goals of engaging young people with the sciences and maths using the inspirational context of space, and facilitating pathways into space sector careers by working with industry as well as education.

The presentation was given by Robin Mobbs, who is a lead educator with the National Space Academy.

The term “Principia” was used for two reasons.

The first reason was to honour Isaac Newton’s great work “Philosophiæ Naturalis Principia Mathematica” often simply referred to “Principia”. It is a work in three books written in Latin and first published on the 5th July 1687. After annotating and correcting his personal copy of the first edition, Newton also published two further editions, in 1713 and 1726. The Principia states Newton’s laws of motion, forming the foundation of classical mechanics; Newton’s law of universal gravitation; and a derivation of Kepler’s laws of planetary motion (which Kepler first obtained empirically). The Principia is justly regarded as one of the most important works in the history of science.

The image above left shows the Royal Astronomical Society’s own copy of the famous book. The image above right shows a section of an apple tree from Newton’s garden in Woolthorpe. This tree might have produced the apple that might have fallen on Newton’s head and given him the idea about gravity.

Sir Isaac Newton, 25 December 1642 – 20 March 1726/27, was an English mathematician, astronomer, and physicist (described in his own day as a “natural philosopher”) who is widely recognised as one of the most influential scientists of all time and a key figure in the scientific revolution.

The second reason was that Major Tim Peake’s mission, part of expedition 46/47 aboard the International Space Station, was called “Principia” (which he picked in honour of Sir Isaac Newton) and it included work on a wide variety of education projects alongside his day-to-day work for ESA and in collaboration with other space agencies on the ISS.

In support of Tim’s mission, various different organisations worked with the UK Space Agency on related educational resources to take advantage of the opportunities that the mission had provided.

For one of these education projects the National Space Academy designed and built a set of kit for a series of simple demonstrations that Tim conducted and filmed whilst on the International Space Station (ISS) to illustrate fundamental aspects of physics and chemistry curricula, comparing results in micro-gravity with those in classrooms on Earth for the project Astro Academy: Principia.

The above image left shows the bag closed ready for launch. The whole kit had to be vibration tested by Leicester University Space Research Centre to show it would survive launch, which can be rather bumpy. The above image right shows the crew transfer bag open to show how the equipment was packed. During launch the kit was also bubble wrapped and stowed in a zip-lock bag. Tim had to inspect each item for damage before he removed it from the bag.

Ball on a thread

Duralin ball around a lexan loop

This is a centripetal force demonstration. Tim pushed the smooth duralin ball around the lexan loop; in the micro-gravity environment on the ISS the ball kept rotating round the loop until the energy loss due to friction slowed the ball down enough to leave the loop. There is also some air resistance on the ISS (wind speed of about 15cms-1)

Tim used this to show the harmonic oscillation of a diatomic molecule. It also shows other degrees of freedom as it rotates and translates.

Lexan was used because materials such as Perspex evaporate 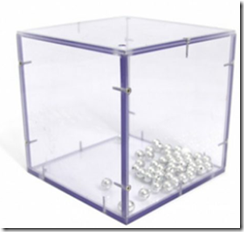 Tim shook the box to model the random motion of particles in a gas. Believe it or not static electricity was a problem

The demonstrations covered secondary science topics such as circular motion, collision physics, kinetic theory of gases and harmonic motion, using systems which act differently under Earth gravity than in the micro-gravity environment on the ISS, where the theory is beautifully clear.

All the activities, including videos of Major Peake carrying out the experiments and the teachers’ guides, can be found by clicking the link below. There are also suggestions about suitable equipment that can be made or purchased.

Tracker software can be used to investigate and analyse the motion by producing different graphs.

Simple equipment can be used to replicate the experiments with video recording and tracker to analyse the motion. The two balls suspended by kite string model momentum conservation.