Lecture 4: From Particles to Cosmology 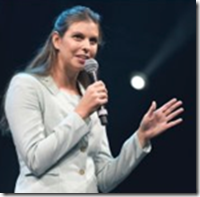 Claudia de Rham (29 March 1978) is a Swiss theoretical physicist working at the interface of gravity, cosmology and particle physics. She is based at Imperial College London. She won the Blavatnik Award for Young Scientists in 2018 for revitalizing the theory of massive gravity.

Our Universe is a remarkable laboratory for physics both at very high and very low energies. Whilst most of the history of our Universe is understood with a remarkable precision, the very origin of the Universe remains one of the biggest open questions of humankind. In parallel, the current state of our Universe remains mystifying, with its 95% of unknown dark matter and dark energy. Throughout this talk Professor De Rham reviewed the open puzzles of cosmology and their embedding within the particle physics and gravitational paradigms.

J. J. Thomson won the Nobel Prize in 1906 “for his theoretical and experimental investigations on the conduction of electricity by gases”. But he was more famous for the discovery of the electron.

J. J. Thomson’s son, George Paget Thomson, won the Nobel Prize in 1937 for his discovery of the wave properties of the electron by electron diffraction.

Father showed the electron to be a particle but son showed that it has wave-like properties because it can be diffracted.

Light can behave as a wave and a particle. A single photon can be absorbed and emitted.

Feynman diagrams are visual representations of particle interactions which also show the exchange particles involved. Above is a Feynman diagram showing that two electrons exchange a virtual photon (g) as they repel each other.

The virtual photon is the exchange particle (or boson) which carries the electromagnetic force between charged particles. Particles with electric charges can either attract or repel each other by exchanging particles called virtual photons.

In theories of quantum gravity, the graviton is the hypothetical elementary particle that mediates the force of gravity. At the moment it is not part of the standard model.

The Laser Interferometer Gravitational-Wave Observatory (LIGO) is a large-scale physics experiment and observatory to detect cosmic gravitational waves and to develop gravitational-wave observations as an astronomical tool. Two large observatories were built in the United States with the aim of detecting gravitational waves by laser interferometry. These can detect a change in the 4 km mirror spacing of less than a ten-thousandth the charge diameter of a proton, equivalent to measuring the distance from Earth to Proxima Centauri (4.0208 x 1013 km) with an accuracy smaller than the width of a human hair.

Is there wave particle duality for gravity? At the quantum level there should be graviton duality.

Proof isn’t so far away.

Gravitational waves forming CMB noise at human scale are dual to gravitons at the Planck scale: we can say, they’re gravitons expanded during the Big Bang in similar way, like CMB photons are form of gamma radiation expanded during inflation of early universe.

The Planck scale is the universal limit, beyond which the currently known laws of physics break.

History of the Universe (ESA)

The fluctuations generated during inflation have a quantum origin.

Observing B mode polarisation in the CMB could be traced to primordial quantum gravitational wave fluctuations.

In general, the polarisation pattern has two geometrical components. Instead of describing it by the descriptions North-South and East-West which depend on an arbitrary choice of coordinates, we can describe it by its orientation relative to itself.

The full polarization pattern is a random superposition of these plane-wave modulated patterns. B-modes retain their special nature as manifest in the fact that they can possess a handedness that distinguishes left from right. For example here are two polarization fields with the same structure but in the E-mode on the left and the B-mode on the right:

Gravitational waves travel at the speed of light with a precision of 10-15, (however photons travel through a light cone). This implies that the graviton is massless up to great precision. mg < 10-20eV

A neutrino is a fermion (an elementary particle with half-integer spin) that interacts only via the weak subatomic force and gravity. The mass of the neutrino is much smaller than that of the other known elementary particles. Although only differences of squares of the three mass values are known as of 2016, cosmological observations imply that the sum of the three masses must be less than one millionth that of the electron. The neutrino is so named because it is electrically neutral and because its rest mass is so small (-ino) that it was long thought to be zero. The weak force has a very short range, gravity is extremely weak on the subatomic scale, and neutrinos, as leptons, do not participate in the strong interaction. Thus, neutrinos typically pass through normal matter unimpeded and undetected.

A boson is any particle with a spin that is an integer multiple (0, 1, 2, …) of quantum units of angular momentum. Bosons are the carrier particles of all fundamental interactions. A carrier particle is a boson associated with quantum excitations of the field corresponding to one of the basic forces of nature.

Bosons do not obey the Pauli exclusion principle. This means there is no limit to the number of bosons that can occupy the same point in space at the same time; so, for example, there is no limit in theory to the brightness of a beam of light. Bosons are one of two main categories of particle in the Standard Model; the other main category is the fermions.

The bosons that serve as carrier particles for the four basic forces in nature – electromagnetism, the strong force, the weak force, and (in theory) gravity – are known collectively as gauge bosons. Their existence is demanded by a principle called gauge invariance.

The photon (g), the carrier of the electromagnetic force, is a massless, uncharged boson with spin 1. The W (mass = 80.4GeV/c2) and Z (mass = 91.187GeV/c2) bosons, also called intermediate vector bosons, mediate the weak force between leptons and in the decay of hadrons. The Z boson is electrically neutral, whereas the W boson comes in two forms: positively and negatively charged.

The gluon is the carrier particle of the strong interaction that holds quarks together. Gluons are electrically neutral and have spin 1. They are the equivalent in quantum chromodynamics of photons in quantum electrodynamics. Neither quarks nor gluons exist as isolated particles, but only as constituents of hadrons. The as-yet-undetected graviton, presumed to be associated with the gravitational force between masses, is theorised to have spin 2.

The existence of another type of boson, known as the Higgs boson, has been established from observations made at the Large Hadron Collider and the Tevatron beginning in 2012. The Higgs boson was hypothesised as the means by which all other particles in the Standard Model have the masses they do through what is called the Higgs field. The existence of the Higgs, which was first theorised in 1964, completes the Standard Model.

Ironically we understand the graviton better than the photon.

There are an infinite number of irrelevant operators that enter the Planck scale.

Max Karl Ernst Ludwig Planck, FRS (23 April 1858 – 4 October 1947) was a German theoretical physicist whose discovery of energy quanta won him the Nobel Prize in Physics in 1918.

Albert Einstein (14 March 1879 – 18 April 1955) was a German-born theoretical physicist who developed the theory of relativity, one of the two pillars of modern physics (alongside quantum mechanics).

General relativity predicts its own failure. At the Planck scale the theory needs completion. The ultimate quest is for quantum gravity. At the classical level GR predicts its own breakdown through singularities.

In the centre of a black hole is a gravitational singularity, a one-dimensional point which contains a huge mass in an infinitely small space, where density and gravity become infinite and space-time curves infinitely, and where the laws of physics as we know them cease to operate; it is “the point where all laws of physics break down”.

The Galactic Centre Group (GCP) is dedicated to researching the innermost regions of the Milky Way at the highest angular resolution possible in order to understand the formation and evolution of galaxies and their central supermassive black holes.

You can trust GR at the Black Hole horizon.

General relativity suggests that curvature becomes infinite at the centre of the Black Hole and the theory breaks down.

Infrared Tully-Fisher is better as dust extinction much less

The Tully-Fisher Relation L ∝ Wα is a correlation that holds for galaxies with disks stabilized by rotation, between the intrinsic luminosity L of the galaxy in optical or near-infrared bands and the rate of rotation W. It can be used to measure elliptical galaxy distances.

• an ideal standard candle is very bright, and of known brightness (at least for some observable time)

• type Ia supernovae fit this description – when they explode, they reach a large absolute magnitude that varies little from supernova to supernova

• a type Ia supernova occurs in a binary star system where gas from a red giant overflows onto a white dwarf – when a critical mass is reached the white dwarf can no longer be supported and collapses, then rebounds (type II supernovae are single stars that collapse when nuclear fusion ceases… Ia vs Ib depends on if the companion has hydrogen in the atmosphere)

Gravity is an attractive force. We would expect expansion to slow down. In fact we observe the opposite. The expansion is accelerating.

In General Relativity we need to postulate dark energy to explain the acceleration.

In physical cosmology and astronomy, dark energy is an unknown form of energy which is hypothesized to permeate all of space, tending to accelerate the expansion of the universe. Dark energy is the most accepted hypothesis to explain the observations since the 1990s indicating that the universe is expanding at an accelerating rate.