Light Fantastic:  The science of colour

At the start of his lecture Professor Vukusic reminded us that we see light because electrons, which were raised to higher energy levels on absorbing energy, can drop back down to lower energy levels and release photons with frequencies in the visible light range.

He explained that biological organisms can seem coloured either because they contain a pigment or some other type of chemical or their structure reflects/refracts each of the wavelengths of visible light differently (structural colour).

The ladybird is coloured because it contains pigments. The butterfly contains some “blue” because it fluoresces.

Some types of beetle actually flash and you can identify the species by the frequency of the flashes.

The Professor continued the lecture by talking about structural colour in biological systems by first explaining why there are two distinct methods of colour production (as explained by physics). The main reason is that together they make camouflage better.

Quantum effects rely on interference and the professor used a slinky spring and two volunteers to demonstrate constructive and destructive interference (and a standing wave).

The picture below shows the professor demonstrating interference in a bubble. This why you can see different colours in a bubble.

There are no pigments in the butterfly but there is a large polarisation signature. You can see the electron microscope picture of the scales. The colour is caused by the refractive index between the scale and the air.

There are different colours because of different molecular arrangements in the scales.

L’Oreal are using a similar process in LANCOME cosmetics.

A Japanese company is using the process in fabrics.

Maxwell’s equations explain the behaviour of electromagnetic waves and are scalable.

How biological systems produce colour is also being used for anti-counterfeiting and security (in passports and credit cards for instance).

In the next part of his lecture Professor Vukusic reminded us that visible light is only one part of the electromagnetic spectrum. Infra-red radiation is useful in astronomy as it allows us to see things not visible in other wavelengths. Dust, for instance, is transparent in IR light.

IR shows stars not visible with visible light, it also shows up some exoplanets and can identify a hot engine in a motorcar.

A picture showing a snake with an IR camera. 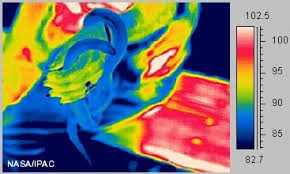 The snake appears cold not just because it is cold blooded but also because it has an efficient system of insulation and blood vessels.

The professor spent a little time going through the process of how we see.

Rods allow us to see in low levels of light but don’t discriminate colour.

Cones work in higher light intensities can allow us the see red, blue and green wavelengths of light (all other colours come from the mixing of these different wavelengths).

Unfortunately some people suffer from colour blindness which means they can’t distinguish some of the wavelengths and this impairs their ability to see certain colours. The Ishihara test is used to diagnose the condition. 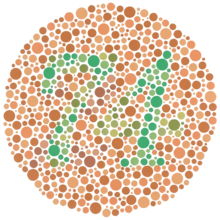 Colour blindness is caused by a gene problem on the X sex chromosome.

The Professor continued his lecture with 3D Photonic crystals.

Photonic crystals are found in living things such as the sea mouse.

The structure has two separate volumes. 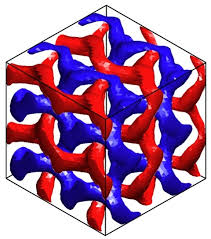 The picture below shows the scales in a white beetle. The filaments are the seat of colour because the chaotic arrangement of the fibres causes constructive interference of all the visible colours of light. The colour mixing causes white.

Paper manufacturers are very interested in this in order to make the whitest paper possible.

The professor finished his lecture by talking about another biological inspired application, a new form of sticky tape.

The video you can access below is an early version of the lecture. It was filmed in 2007.

One thought on “Physics in perspective lecture 2012”