Dr. Martin is a historian of modern science and technology, focusing on the physical sciences in Cold War America. His interests lie in the sciences of complex matter—solid state physics, condensed matter physics, and materials science—and the ways in which physicists’ philosophical and ideological commitments shaped the institutional structure of these fields.

Physics (from the Ancient Greek φύσις physis meaning “nature”) is the fundamental branch of science. The primary objects of study are matter and energy. Physics is, in one sense, the oldest and most basic academic pursuit; its discoveries find applications throughout the natural sciences, since matter and energy are the basic constituents of the natural world. The other sciences are generally more limited in their scope and may be considered branches that have split off from physics to become sciences in their own right. Physics today may be divided loosely into classical physics and modern physics.

In 1800 the term “physics” was still really unknown

In 1900 it was difficult to move the subject forwards

Should physics be pure?

Prof Henry Augustus Rowland FRS(For) HFRSE (November 27, 1848 – April 16, 1901) was an American physicist. Between 1899 and 1901 he served as the first president of the American Physical Society. He is remembered today particularly for the high quality of the diffraction gratings he made and for the work he did with them on the solar spectrum. He studied physics under Hermann von Helmholtz in his laboratory in Berlin (1875–6), and carried out a well-known research on the effect of an electrically charged body in motion, showing it to give rise to a magnetic field. He took ideas from his training in Europe to John Hopkins University.

He was the foremost promoter of the ideals that defined turn-of-the-century US physics. Above all, he advocated the pure-science ideal, which held physics separate from applied or “practical” science.

The Johns Hopkins University is an American private research university in Baltimore, Maryland. Founded in 1876, the university was named for its first benefactor, the American entrepreneur, abolitionist, and philanthropist Johns Hopkins.

The highest aim of the physicist https://history.aip.org/exhibits/gap/PDF/rowland_aim.pdf

After the First World War more physicists go into industry but the subject was still looked down upon until the mid-twentieth century.

A song by physicist Arthur Roberts that made the rounds at MIT’s Radiation Laboratory in 1944 manifested the attitude that prevailed in mid-century academic physics. The final verse disdained the comparative riches awaiting physicists who went corporate:

Now all you bright young fellows with your eyes upon the stars,

You graduate assistants who subsist on peanut bars

If industry should woo you with two hundred bucks a week

Refuse the job and say, without your tongue in your cheek,

It’s the principle of the thing

That makes the nucleus go round

It’s the philosophical ethical principle, we keep telling ourselves, of the thing.

The field of solid-state physics emerged from efforts to ease tensions between industrial and academic research.

William Webster Hansen (May 27, 1909 – May 23, 1949) was an American physicist and professor. He was one of the founders of the technology of microwave electronics.

He became interested in the problem of accelerating electrons for X-ray experiments, using oscillating fields, rather than large static voltages. At the University of California, Berkeley, Ernest Lawrence and his assistant David H. Sloan, had worked on an accelerator driven by a resonant coil. Hansen proposed replacing the coil with a cavity resonator. In 1937, brothers Russel H. Varian and Sigurd F. Varian came to Stanford to work on the foundations of what was to become radar. Hansen exploited some of the Varian’s work to develop the klystron and during the years 1937 to 1940, along with collaborators such as John R. Woodyard, founded the field of microwave electronics.

A widespread notion in the physics community held that “physics” referred to natural phenomena and “physicist” to someone who deduced the rules governing them—making applied or industrial researchers nonphysicists almost by definition. Hansen reacted to his colleague David Webster’s suggestion in 1943 that physics was defined by the pursuit of natural physical laws: “It would seem that your criterion sets the sights terribly high. How many physicists do you know who have discovered a law of nature? … It seems to me, this privilege is given only to a very few of us. Nevertheless the work of the rest is of value.”

Beginning in the 1960s, a subset of solid-state physicists began to prefer calling their field “condensed-matter physics” because of practitioners’ increasing interest in nonsolid states of matter and the quantum many-body problem.

Philip Anderson, a Bell Labs theorist who held a seasonal professorship at Cambridge, championed the change in term, and his support helped popularise it in the US.

In 1972 he published a landmark essay in Science entitled “More Is Different,” in which he argued that each new scale of complexity that scientists engaged with promised a cornucopia of new fundamental and intellectually stimulating questions. As condensed-matter physicists tackled more complex physical phenomena, they could therefore expect to open up new intellectual frontiers. Adopting the name condensed-matter physics was more than a simple rebranding. It represented a priority shift driven by changes in both the intellectual and professional circumstances of US physics.

Solid-state physics moved out of industrial laboratories such as Bell Labs to research departments of universities.

A common sentiment, articulated most sharply by historian Daniel Kevles, is that “physics is what physicists do.” The rise of condensed-matter physics, however, suggests a modification to the Kevles dictum: physics is what physicists decide it is. Solid-state physics, and condensed-matter physics after it, won prominence in large part because physicists recognized the power of categories and embraced their agency to craft them according to their needs.

Daniel J. Kevles (born 2 March 1939 in Philadelphia, Pennsylvania) is an American historian of science best known for his books on American physics and eugenics and for a wide-ranging body of scholarship on science and technology in modern societies. 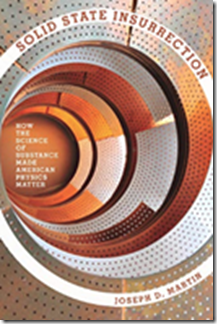