There are many different styles of bridge but the arch is one of the oldest. From the time of the Roman’s to Brunel’s Maidenhead bridge, which has the longest, flattest brick arch in the world. It is an exceptionally reliable design.

The Maidenhead Bridge was designed by the Great Western Railway Company’s engineer, the noted mechanical and civil engineer Isambard Kingdom Brunel, and it was completed in 1838, but not brought into use until 1 July 1839. 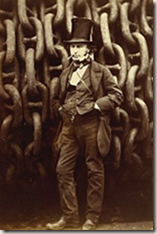 Isambard Kingdom Brunel FRS (9 April 1806 – 15 September 1859) was an English civil engineer who is considered “one of the most ingenious and prolific figures in engineering history”, “one of the 19th-century engineering giants”, and “one of the greatest figures of the Industrial Revolution, [who] changed the face of the English landscape with his ground-breaking designs and ingenious constructions”. Brunel built dockyards, the Great Western Railway (GWR), a series of steamships including the first propeller-driven transatlantic steamship, and numerous important bridges and tunnels. His designs revolutionised public transport and modern engineering.

The dome shape is also an effective way of roofing a building although the strength relies on the rise being at least half the span.

The first arches were built in Egypt and Mesopotamia at about 3600 B.C.E, but it is only recently that engineers have really understood why arches are so stable.

Mesopotamia is a historical region of Western Asia situated within the Tigris–Euphrates river system, in the northern part of the Fertile Crescent, in modern days roughly corresponding to most of Iraq, Kuwait, the eastern parts of Syria, South eastern Turkey, and regions along the Turkish–Syrian and Iran–Iraq borders.

It would take four breaks in the arch structure to cause it to fall down but the invention of the railways and the need to cross flatter, longer stretches of water meant that the new bridge designs appeared.

These structures often used cast iron which is weak under tension and not suitable for beams, but wrought iron and steel lent themselves to the suspension bridge type.

The Iron Bridge over the River Severn at Coalbrookdale, England (finished 1779)

Cast iron is a group of iron-carbon alloys with a carbon content more than 2%. Its usefulness derives from its relatively low melting temperature. The alloy constituents affect its colour when fractured: white cast iron has carbide impurities which allow cracks to pass straight through, grey cast iron has graphite flakes which deflect a passing crack and initiate countless new cracks as the material breaks, and ductile cast iron has spherical graphite “nodules” which stop the crack from further progressing.

Wrought iron is an iron alloy with a very low carbon content (less than 0.08%) in contrast to that of cast iron (2.1% to 4%). It is a semi-fused mass of iron with fibrous slag inclusions (up to 2% by weight), which gives it a “grain” resembling wood that is visible when it is etched or bent to the point of failure. Wrought iron is tough, malleable, ductile, corrosion resistant, and easily welded.

Steel is an alloy of iron with typically a few percent of carbon to improve its strength and fracture resistance compared to iron. Many other additional elements may be present or added. Stainless steels that are corrosion and oxidation resistant need typically an additional 11% chromium. Because of its high tensile strength and low cost, steel is used in buildings, infrastructure, tools, ships, trains, cars, machines, electrical appliances, and weapons.

A suspension bridge is a type of bridge in which the deck (the load-bearing portion) is hung below suspension cables on vertical suspenders. The first modern examples of this type of bridge were built in the early 1800s.

The first iron chain suspension bridge in the Western world was the Jacob’s Creek Bridge (1801) in Westmoreland County, Pennsylvania, designed by inventor James Finley. Finley’s bridge was the first to incorporate all of the necessary components of a modern suspension bridge, including a suspended deck which hung by trusses. Finley patented his design in 1808, and published it in the Philadelphia journal, The Port Folio, in 1810.

James Finley (1756 – 1828), aka Judge James Finley, is widely recognized as the first designer and builder of the modern suspension bridge. Born in Ireland, Finley moved to a 1.16 km2 farm in Fayette County, Pennsylvania, near Uniontown. 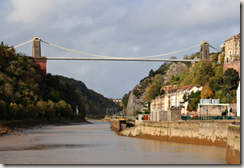 The Clifton Suspension Bridge is a suspension bridge spanning the Avon Gorge and the River Avon, linking Clifton in Bristol to Leigh Woods in North Somerset. Since opening in 1864, it has been a toll bridge, the income from which provides funds for its maintenance. The bridge is built to a design by William Henry Barlow and John Hawkshaw, based on an earlier design by Isambard Kingdom Brunel. It is a grade I listed building and forms part of the B3129 road.

The Humber Bridge, near Kingston upon Hull, East Riding of Yorkshire, England, is a 2.22-kilometre single-span road suspension bridge, which opened to traffic on 24 June 1981. When it opened, the bridge was the longest of its type in the world; it was not surpassed until 1998, with the completion of the Akashi Kaikyō Bridge, and is now the eleventh-longest.

The bridge spans the Humber (an estuary formed by the rivers Trent and Ouse), between Barton-upon-Humber on the south bank and Hessle on the north bank, connecting the East Riding of Yorkshire with North Lincolnshire. Both sides of the bridge were in the non-metropolitan county of Humberside until its dissolution in 1996. The bridge can be seen for miles around and from as far as Patrington in the East Riding of Yorkshire and out to sea miles off the coast. It is a Grade I listed building.

The Forth Bridge with its three double cantilevers.

A cantilever bridge is a bridge built using cantilevers, structures that project horizontally into space, supported on only one end.

Windsor Railway Bridge designed by Brunel and built in 1849.

A tied-arch bridge is an arch bridge in which the outward-directed horizontal forces of the arch(es) are borne as tension by a chord tying the arch ends, rather than by the ground or the bridge foundations. This strengthened chord may be the deck structure itself or consist of separate, deck-independent tie-rods. The design is also called a bowstring-arch or bowstring-girder bridge.

Modern bridge designers will often make a model of the intended bridge and view it through polarised light so that stress patterns can be seen.

An electromagnetic wave. E and B are the electric and magnetic fields respectively. Figure adapted from original by P. Wormer under CC BY-SA 3.0

Linearly polarised waves can be created by passing unpolarised waves through a polarising filter, which only transmits (allows through) oscillations in a certain plane. Waves polarised perpendicular to the allowed plane cannot be transmitted through the filter. For example, a polarising filter for waves on a string could consist of a barrier with a long, thin slit, so that the string can only move in the direction allowed by the slit.

The operation of a polarising filter, converting an unpolarised wave into a polarised wave. The arrows represent the directions in which the wave oscillates.

Cross polarisation involves two polarising filters and the specimen is placed between the two.

To build the arch bridge place the wooden supports (known as ‘centering’) between the ends of the bridge (say there like the scaffolding used around the edge of buildings or under bridges), then add the blocks, starting at the ends.

Take the wooden supports away – the bridge stays up! The bridge is strong enough for people to walk over it even though the blocks are not fixed together in any way. The shape of the brick means that they are being squashed in from the sides (‘in compression’) and they can’t fall down.

How does it work

Two features of the bridge contribute to its strength. The blocks at each end are fixed to the base and the pieces which make up the arch are nearly as deep from the top to bottom as they are long.

The blocks at either end of the bridge is firmly attached to the base, which is itself rigidly constructed. When you stand on the bridge your weight tries to push each section of the arch downwards. The effect of this is like driving a wedge into a log of wood; the two sides are strongly pushed apart and react by pushing inwards on the sections of the bridge.

The fact that the blocks are deep from top to bottom means that the arch can support heavy weights without going out of shape. A thin arch would not do this,

What does it show?

Historically, arches of this sort were usually made of stone, a material which is strong if you try to crush it but tends to break if you try to stretch or bend it, as would happen for example if you tried to make girders for a building out of it.

Arches, and domes which are closely related to arches, have been used for thousands of years for bridges and roofing structures and can be seen around us today, for example railway arches and tunnels, and porches of older houses.

The Greeks did not use arches so their temples had to have many supporting pillars close together.

The Temple of Hephaistos in Athens, the best-preserved Doric temple in Greece.

When wood and steel are used in buildings, arches became less necessary as these materials, unlike stone, do not break when stretched, so can be used for beams and girders.