This simple exhibit allowed an investigation into the principle of the counterbalance and can be easily replicated at home with some identical blocks such as dominoes. 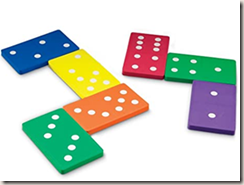 The idea was to get the blocks to reach out as far as possible from the top of a fixed base, which is placed on a table. 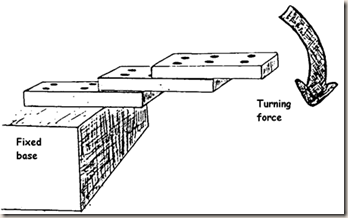 If you simply build out from the base, each block going further out, the whole structure will eventually tilt and fall over, as shown above.

This happens because there is a turning force (caused by gravity) which pulls the blocks down.

The blocks can be made stable by counter-acting the turning force with another in the opposite direction.

The exhibit was concerned with counterbalance, turning forces and centre of gravity.

Turning forces, also known as moments, can cause things to turn. They occur when, and only when, there is a force acting at a distance from a point about which an object can turn.

A moment = force (N) x the perpendicular distance between the force and the turning point.

An example of a turning force in action is the use of a spanner to tighten or undo a nut.

Something rolling down a slope uses the force of friction. If there were no friction then the object would not roll but slide down the slope. 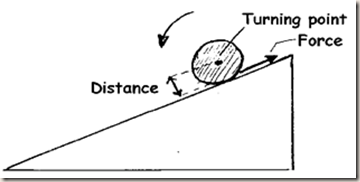 Sometimes turning forces act in opposite directions and balance the object.

You may have experienced something like this in the playground, a seesaw. A heavy person can balance a lighter person by having the heavier person closer to the turning point (also known as the pivot point)

In the hangover problem, the force was gravity, and it can be thought of as acting through the centre of gravity.

Centre of gravity, in physics, is an imaginary point in a body of matter where, for convenience in certain calculations, the total weight of the body may be thought to be concentrated.

If the arrangement of the blocks was such that its centre of gravity was in front of the turning point (the edge of the fixed base), then the turning force would make the blocks turn and fall, as in the diagram below. 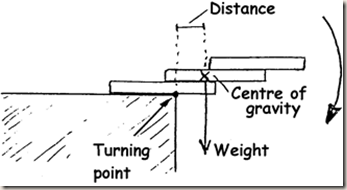 However, this would be very unstable, as any slight turning of the blocks would mean there would be a distance between the weight and the turning point. 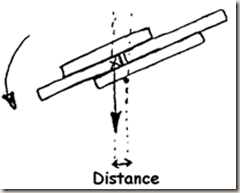 Some of the large cranes you see on building sites use counterbalance, A very heavy counterweight is fixed to the crane’s jib, at the other end from the load being lifted. If this counterweight was not present, there would be a turning force, and the crane would topple over.

The diagram below shows one possible way of arranging the blocks to give the greatest ‘overhang’. There are other ways, and all of them will involve a counterbalance, and all will have their centre of gravity behind the edge of the fixed base.

The more you build out from the base, the more you must also build back to counteract the turning force which would otherwise tilt the blocks over and make them fall. 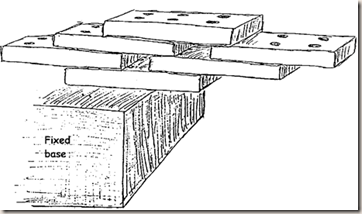 If you try to copy the arrangement in the diagram above, you will need to adjust the blocks very slightly to find the best balance point.