There were several challenging puzzles contained within this exhibit (and I was rubbish at all of them). None of these were designed to be solved immediately, a little (and in my case, a lot) thought was required.

The puzzles in Puzzle Place were all spatial puzzles in two and three dimensions. Engineers and designers need to think about how things fit in relation to each other so that machines can be put together efficiently. These puzzles tested and developed spatial awareness and were fun (for most people).

A five-piece jigsaw may have seemed simple at first glance, but it was difficult without a picture for guidance. The pieces all consisted of five squares arranged in different ways. These were called pentominoes.

The five pentominoes in this exhibit fitted together to form a 5 x 5 square. To solve this puzzle, you first had to look at the corners and find the pieces that fitted into them. There were several ways of doing it (I believe).

There were twelve pentominoes altogether:

You could fit all of them together to form rectangles. Because each pentomino consisted of five squares and there are twelve in all, each rectangle had to contain sixty squares. There were three such rectangles 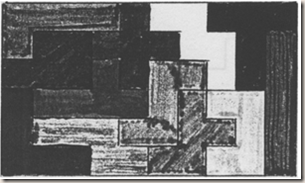 You could make your own shapes and see how you get on with the puzzles.

This was a game for two players, where the pieces were the twelve pentominoes. The game was played on an 8 x 8 board. If you want to have a go a chessboard would do as long as the pentominoes are made up of similar sized squares.

The rules are simple. Each player takes it in turn to place one of the pieces on the board. The loser is the one who cannot fit any of the remaining pentominoes into a space. The theoretical minimum number of moved is five (this in an interesting puzzle in itself) whereas all twelve pentominoes could be fitted onto the board, although this would never happen in a game. 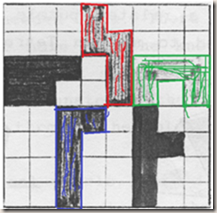 A won game with five pieces on the board 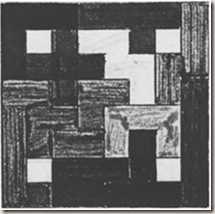 All twelve pieces fitted onto the board. There are other arrangements. Do you think you could find them?

It is found that the usual number of moves per game is seven. Therefore, it is in the interest of player two to crowd the board a little, whereas player one will want to space it out. Although the rules are simple, this is a surprisingly challenging game.

A simple three-dimensional problem. Remember the cube is three squares in each direction. Probably the easiest way of solving this puzzle was to find the surface with nearly all of its nine squares present. This was made the bottom of the cube. This gave two missing squares. The piece with two squares sticking out was located to see if it fitted with the top piece ever it. There were different ways of fitting in the middle piece.

You may have seen a related puzzle in a Christmas cracker, where you are asked to make a tetrahedron (triangular-based pyramid) from two pieces:

The trick is the half twist when you put the pieces together. In the exhibit puzzle each of the two pieces were further divided in two, so that the tetrahedron was made up from four identical pieces.

Each piece had a blunt end and a sharp end. If you looked at the blunt end on its own, you would notice that it was a tetrahedral in shape: therefore, the blunt ends had the correct angles to be corners of the tetrahedron. It is natural to think that the diamond-shaped faces of the pieces fit against each other, but this was not the case. In fact, the diamond-shaped faces were all on the outside of the tetrahedron. The only faces that joined onto other pieces were the isosceles triangles.

This consisted of a wooden rod with a hole and string knotted through it to form two loops. There were two balls threaded onto the string. They could both be on one loop or each ball could be on its own loop. The challenge was to move a ball from one loop to the other.

Some lateral thinking was needed here. There were three basic ingredients: the balls, the hole and the knot that formed the string into two loops. The easiest solution would be to put a ball through the hole; unfortunately, the hole was not big enough. What then could go through the hole?

This is a form of topological puzzle. Below is another one you can do. Thread a piece of string through a pair of scissors like this:

Now tie the loose ends onto something so that you cannot cheat. Next, release the scissors without using them to cut the string. The solution is to extend the loop and thread it back the way it came until the loop is large enough to pass the scissors through:

Now try putting it back the same way. Remember – do be careful with the scissors. 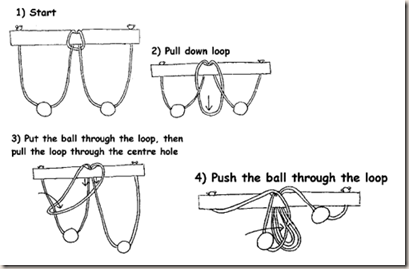 This is also known as the Soma cube. It was invented by Piet Hein, who had the idea whilst listening to a lecture on quantum physics. The speaker, Werner Heisenberg was discussing space divided into cubes, and Hein wondered how many irregular shapes (those containing at least one “corner”) could be made from no more than four cubes joined at their faces. He found that there was only one such shape to be made from three cubes (a tricube), but six from four cubes (tetracubes). 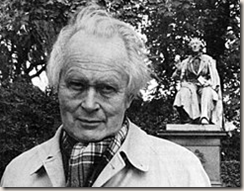 Werner Karl Heisenberg (December 1901 – 1 February 1976) was a German theoretical physicist and one of the key pioneers of quantum mechanics.

Quantum mechanics is a fundamental theory in physics that provides a description of the physical properties of nature at the scale of atoms and subatomic particles. It is the foundation of all quantum physics including quantum chemistry, quantum field theory, quantum technology, and quantum information science.

There were twenty-seven small cubes in all, which is three cubed. Could a 3 x 3 x 3 cube be made from the pieces? Hein found that it could. There is an enormous number of ways to solve this puzzle. Probably the easiest way to go about it was to concentrate first on the pieces which must take up more than one level of the big cube: numbers 5, 6 and 7. Piece 4 was also difficult to fit in because of its shape, but 3, 2 and especially 1 was much easier to leave room for, so it was wise to leave these until the other pieces were sorted. A cube was only one of the shapes that could be made with these pieces. When the cube was mastered there were other shapes that could be made (see below). A Soma cube is easy to make by sticking children’s bricks together or by using balsa wood, which is cheap and easy to cut and stick.

The following are some of the shapes that can be made with the pieces of the seven-piece cube: 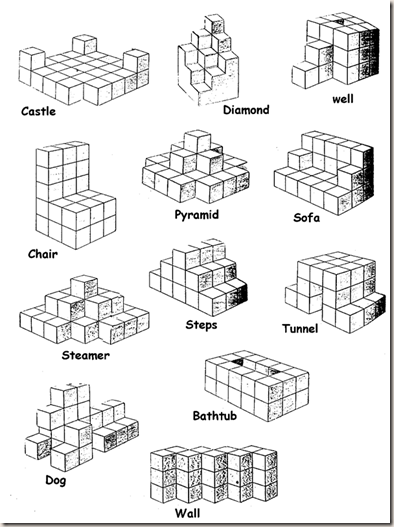 You could have gone one step further and made a Minotaur cube. This was invented by Adrian Fisher and is one of the most difficult puzzles of its kind. In structure, it is similar to the Soma cube, except that it has no tricube: the three cubes being added to pieces 2, 4 and 7 to make the pentacubes.

Adrian Fisher is a maze and puzzle designer, responsible for more than 700 mazes in 35 countries since 1979.

However, whereas there are 240 unique solutions to the Soma cube, there is only one for the Minotaur!