This was an exhibit that emitted a growling noise if you walked towards it. If you walked faster, or swung your arms vigorously back and forth, the growl became higher

Watchdog had a matched transmitter and receiver, The transmitter gave out an ultrasonic signal, which is a sound that has such a high frequency it cannot be heard by humans, and if the signal bounced off anything (like a person walking towards it) it came back to and was detected by the receiver. If the ultrasound bounced off a moving object, it was doppler shifted to another frequency; the reflected signal was higher or lower in pitch than the original. The receiver detected this and the Watchdog growled.

Sound travels in waves in the air and other materials, a bit like the ripples formed in water when a pebble is thrown in.

High pitched sounds have a short wavelength and a high frequency.

In physics, the wavelength is the distance (unit is the metre, symbol is λ) over which the wave’s shape repeats. It is the distance between consecutive corresponding points of the same phase on the wave, such as two adjacent crests, troughs, or zero crossings, and is a characteristic of both traveling waves and standing waves, as well as other spatial wave patterns.

Ultrasound has a very short wavelength 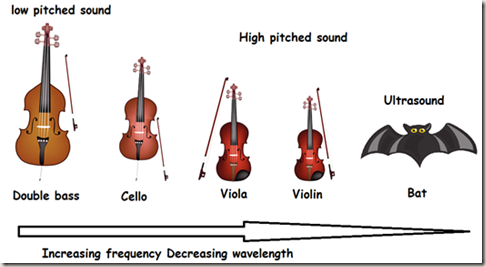 Frequency is the number of vibrations produced every second. Its unit is the Hertz

Sound waves, like all waves, can be reflected; that is, they can bounce off things. Echoes are a good example of this. Sound bounces better of hard objects to give a clearer echo than when it is reflected off soft things.

When an object comes towards you, the noise it makes sounds higher than when it goes away from you, even though it is making the same noise. This is because the sound waves get “squashed” in the direction of travel, making their wavelength smaller. The opposite happens when the object moves away from you. The sound waves get “pulled apart”, making the wavelength longer. This process is called the Doppler effect. The changes in wavelength are known as Doppler shifts.

What is it for?

Watchdog used sound reflection and the doppler effect to detect when something was moving towards or away from it. In fact, it used a simple form of SONAR (Sound Reflection And Navigation). Some animals that cannot rely on sight such as whales and dolphins underwater; and bats, which hunt at night, have developed their own forms of SONAR to find their way about and detect prey. SONAR is also used by submarines.

A whale and a dolphin

A bat, for instance, emits very high squeaks. It can tell how far away something is by how long the echo takes to come back. It can also discover something about the softness or hardness of an object by the quality of the echo.

The difference in pitch between the squeak and the echo tells it how fast the object is moving, just as with the Watchdog exhibit.

Red light has a longer wavelength than blue light. So, when an object is moving away from the observer, light from it is shifted towards the red end of the spectrum. This is called Redshift.

Astronomers have discovered that light from most of the galaxies we can see is redshifted, and have concluded that the Universe is expanding. In astronomy redshift is caused by the space between the observer and the observed getting larger not because of the actual motion of the observed. 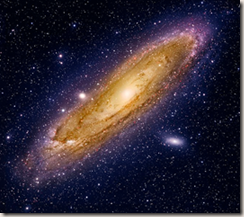 The Andromeda galaxy, the Milky Way’s (our home) nearest neighbour, which is actually moving toward us (so blue shifted). In this case it isn’t due to space “shrinking” but the gravitational pull between the two galaxies

The Milky Way and Andromeda galaxies are expected to collide in around 4.5 billion years, merging to form a giant elliptical galaxy or a large lenticular galaxy